The site had a bit of an outage (sorry about that) and for this and several other reasons, I decided to finally transfer my domain to my web host. It was like trying to untangle a ball of knotted yarn, no idea where to start and where to end and aaaaaahhhhrrrg! Then Jeff came along and did some very patient customer service chatting with me, didn’t make fun of me for being quite obviously a clueless idiot, and guided me through the process of disabling my whois guard protection and unlocking my domain and getting my EPP code and – *hyperventilates*.

Then he magically made my site reappear out of thin air.

Anyway, if I retain my sanity today, its entirely because of Jeff.

A few people have asked questions or expressed concerns about Lexa, either in reviews or to me privately, and they have a point. I know more about her than I wrote, and the most apparent thing about her is her ostensible fragility. It was difficult to fit in much of Lexa’s background since she doesn’t talk for the majority of the book, and she is not the main character of Spectacularly Broken. Lysander likes Lexa, but he’s far too wrapped up in his own issues to spend much time finding out about hers. So here are a few facts on Lexa.

1. She isn’t shy. Lexa has issues with meeting new people and with verbal and physical aggression, but she is not, at her core, a shy person. Once she gets to know the rest of green group, she has no problem calling Cai an idiot or expressing her approval of Cai and Lysander’s blossoming relationship – only she doesn’t do it verbally. She is also her own advocate and has a lot of inner strength. If Finn hadn’t intervened in the incident with Damien, she would have been the first to report it.

2. She has had prior therapy. Oak Hill Manor is not the extent of Lexa’s therapy, it’s simply one of the steps. Like everyone else at the manor, she needed a therapist recommendation in order to participate in the program (another fact I didn’t manage to fit into the book, because Lysander doesn’t give a fig about these things), and she is there voluntarily, challenging herself to interact with her peers.

3. She is determined. Lexa wants to heal. She faces her demons with open eyes and continues to climb one hurdle after another on her path to functioning, balanced and healthy. She accepts the support that green group and Finn give her and tries her best to support them in return because she knows how valuable and helpful it is.

In the end, all I can say is that, as with everyone else in the book, I tried my best to make Lexa a three-dimensional character and to accurately represent the symptoms of her past abuse and resulting issues. It’s important to me not to slip into cliches, and I hope I succeeded.

Cyclical Depression and the Joy of Writing

No blog posts until just before Spectacularly Broken was released, and that was over two months ago. The hell?

Unfortunately, this happens to me sometimes. Without trying to make it sound pretty – I have depression, severe anxiety and adult ADD. There is a lot going on in my head. I’ve struggled with this most of my life, and it has all steadily gotten worse to the point where I can no longer function without medication. I still try to keep the amount of meds low, taking some of them only on an as-needed basis (which is cleared with my health professional, of course). Unfortunately, even the meds can’t fully pull me out of the valley when my depression hits a low point, and then I tend to distance myself from the internet. Facebook posts are less frequent, I don’t tend to answer emails, I just plain don’t interact. That goes for real life too. I don’t generally leave the house much during these episodes, unless I absolutely have to, or I make myself take a walk in an attempt to feel better. So if you’ve tried to contact me, please forgive me for not getting back to you right away. I will eventually. At some point, the hypomania hits, and then I’m productive and full of energy, I clean the house, I cook and freeze food like a crazy person. I dance a Vienna waltz around the kitchen with my son.

(No joke. My kitchen is huge. It’s the largest room in my house, actually.)

Most important of all, I write. I get close to despairing when I’m in the valley because my head won’t let me write, and when I force myself to do it anyway, what comes out is the worst piece of writing in the history of mankind, or at least it seems that way to me. And then, once I’ve managed the climb, I’ve got ideas and energy and I write and write and it’s awesome.

I just wanted to put this out there. Now I’m gonna go back to writing about an artist and a baseball player and a little sister who steals condoms to use as water balloons.

I had to work an overnight shift, until four thirty this morning. The baby routinely starts his day at six or seven, or eight at the latest, so I didn’t have a chance to get a whole lot of sleep. Consequently, I’m a zombie today. It’s a miracle I didn’t pour orange juice into my cereal or put my pants on backwards. And my book comes out tomorrow, so I’ve been running around trying not to hyperventilate and tear my hair out. On top of all that, kidlet learned how to climb stairs, so now he has yet another way of bringing about his untimely demise if I take my eyes off him for half a second.

I do crafts to calm myself, and because I once told my editor that it seemed to me she hoards her authors like a dragon does its shinies, I did a pretty terrible marker drawing of a dragon (I can’t draw people or animals to save my life, don’t tell anyone, it’ll bring down my street cred). Then I started gluing glitter all over it, because why wouldn’t I?

The cats may have walked through the glitter once or twice. But I’m sure my lovely, amazing editor will appreciate my grand gesture of one clumsy glittery cardboard dragon-like abomination.

If you’d like to marvel at my creation, head over to my Instagram, there’s a couple of pictures on it. 😀

That was all. Hey. Cillian’s fucking informants were dropping like flies, and he had no goddamned time for this hey shit.

from Dirty Deeds by S.E. Jakes 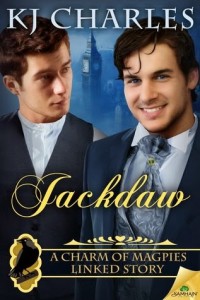 If you stop running, you fall.

Jonah Pastern is a magician, a liar, a windwalker, a professional thief…and for six months, he was the love of police constable Ben Spenser’s life. Until his betrayal left Ben jailed, ruined, alone, and looking for revenge.

Ben is determined to make Jonah pay. But he can’t seem to forget what they once shared, and Jonah refuses to let him. Soon Ben is entangled in Jonah’s chaotic existence all over again, and they’re running together—from the police, the justiciary, and some dangerous people with a lethal grudge against them.

Threatened on all sides by betrayals, secrets, and the laws of the land, can they find a way to live and love before the past catches up with them?

Why I’m reviewing this: KJ Charles is one of my favorite genre authors. I was hooked as soon as I first read “The Magpie Lord”, which to this day remains one of my favorite books. Her writing is expressive, emotional and occasionally quite comical, not to mention stunningly creative – I mean, gay paranormal Victorian romance! – and it works so, so very well. Her knowledge of the historical periods in which her stories are set is outstanding. I adore her characters, her sense of humor, and her ability to create some truly outstanding chemistry. Originally, I wasn’t sure about including book reviews in this blog, but after reading Jackdaw today, I can’t not recommend it.

This book in slightly more than three words: Jackdaw is a spin-off from KJ Charles’ A Charm of Magpies series, and it features appearances from several of my very favorite characters, which quite frankly already would have been enough to hook me. One of the main characters of this book, Jonah, is a minor villain from the series, and Jackdaw is an attempt at his redemption and an exploration of his motives and backstory. He is a flawed character, but also a fascinating one, and I enjoyed getting to know him beyond “that jerk who nearly got my favorite couple killed in Flight of Magpies“. I’m not going to get into the plot beyond what’s already in the blurb, I’ll leave that to anyone wishing to read the book, but I will say that my personal highlight was the massive emotional rollercoaster through which Jonah and his love interest Ben struggle throughout the course of the book. Plus, there’s rooftop chase sequences, stylish magic and Victorian-style swearing. What more do you need in a good book? Not a thing, that’s what.

I’m Having All The Fun… Except Not Really

Blech. Not a surprise to anyone, I’m sure, that I place bronchitis very firmly in the “no fun” category, especially now that my eleven-month-old has it as well. Tough to get anything done when my day currently consists of coughing spells, miserable kidlet, and me feeling sorry for myself. It’s the first time that my son has been actually sick sick, and since I’m not very good at the mommy thing yet, I spend a lot of time freaking out and trying to make sure that he’s comfortable, which means I have a harder time recovering, myself.

Apart from that, I’m having chocolate since that fixes everything, my cats are pouting because I don’t have enough energy to make them feel like they’re the center of the universe, and it’s snowing again which- ARE YOU KIDDING ME?!

Hey guys, I have awesome snow in my back yard. Free to a good home. Limited time offer. Bonus bronchitis included when you pick it up.

New writing endeavor, new protagonist. I thought that after Lysander, who makes an art form out of being contrary, I could handle anything, but nooo. Protag and I are already at odds.

Me: “‘Kay, good plot and all, but this is a romance, so we should probably start working on your love interest.”

Protag: “Is there a gentle, vulnerable soul hiding beneath his rough facade?”

Quote: The Trouble With Tony

from The Trouble With Tony by Eli Easton

My $0.02: The book as a whole is great, but the concept of “hallelujah time” was the one thing that stuck with me the most. Always remember: You do not fuck with hallelujah time.

The kidlet has been cranky lately. He has also been busy playing with the world’s most annoying baby toy drum set. In trying to retain my sense of humor, I thought about what sorts of tracks the kidlet would lay down if he were to record a CD. Here’s the list:

1. Look It’s A Thing Lemme Bash You In The Face With It

2. Everybody Hurts (When I Chew On Them)

3. Hi My Name Is Kidlet And I Want To Put Carrots In Your Face

5. Everything Is Stupid But Napping Is Worse

8. Sleep Is For Losers

9. Food On The Ceiling