So, it’s been a while. I’ve been fighting my mental illness pretty hard, and it doesn’t always look like I’m winning. But more on that another time. This is supposed to be a celebratory post.

Today is release day for the first book in the Atrumancer trilogy: Black Magic Glitterbomb. I was having writer’s block and my editor, the wonderful Raven McKnight, offered to send me some prompts to get the creative juices flowing again. I was originally planning on just using them for exercise purposes, but then she sent me this:

“I liked to relax over a cup of coffee and the bodies of my enemies.” 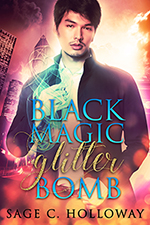 Intriguing, right? So I wrote. And wrote. And wrote. I wasn’t planning on writing a novella, it just happened that way. And when it was done, I realized that the story wasn’t over yet – so I planned for two more.

The book is my first attempt at writing something with a supernatural touch. I like to think I’ve succeeded, but you be the judge. Here’s what it’s all about:

Benji Seung is not one of the good guys. He commands dark magic; he looks out for himself before all else; he kills rival mages and steals their coffee makers. Life is good–or at least as good as it’s going to get for a guy whose soul grows more tainted with every passing day.

Everything changes when he accidentally rescues Kit, a wide-eyed young man down on his luck and living on the streets. With serious reservations but no better options than to leave Kit at the mercy of the elements, Benji takes him in and then can only watch as ominous events around them gain traction.

With an unknown adversary gunning for him, and Kit in the line of fire, the last thing Benji should be thinking about is romance, but he finds it impossible to resist the carefree troublemaker. Together, these two fight for their lives against black magic, diabolical schemes, and evil cupcakes.